This picture was posted recently over at Male Submission Art: Forgive me for the overwhelming hubris of re-posting a link to a post of mine, but I wanted to take the complete text, as it is speaking to a subject dear to my heart. May‘s caption for the post reads:

“A young man kneels on the ground in a forested area, his wrists loosely tied with a single thick rope to the stump of a tree.I think this photograph, suggested by Dorinda, is beautiful (albeit with sorry-looking bondage) and I like the vintage feel it has. I particularly like the shape of the model’s back, ass, and legs; the curvature of his lower body looks feminine while the trapezoidal frame of his upper body looks masculine, and I appreciate this aesthetic mix immensely; it’s pretty and manly.
Much of the time, people refer to the mixing of genders as androgyny, but that word has etymological roots pertaining to being devoid of gender, of being genderless. While valid and attractive to me in its own way at times, this is subtly different from what I find most attractive:the presence of mixed genders. Rather than being half a woman (50% feminine) and half a man (50% masculine), why can’t we be all of both at once? A person can still have 100% feminineand 100% masculine wholes within themselves.“

I also want to say right here and now that that rope is pathetic and useless and the picture would basically be better without it since it is really only draped around and that’s just stupid and why isn’t he moving his hands or something and why does he have that pained (very hot) look on his face since he is not actually attached to that tree in anyway. Ok. /End rant. Back to gender.
I should state that I do, in fact, find androgyny incredibly sexy. This type of beauty-without-gender is embodied, to me, in Tilda Swinton‘s portrayal of the Angel Gabriel in the really and truly terrible movie Constantine:
. 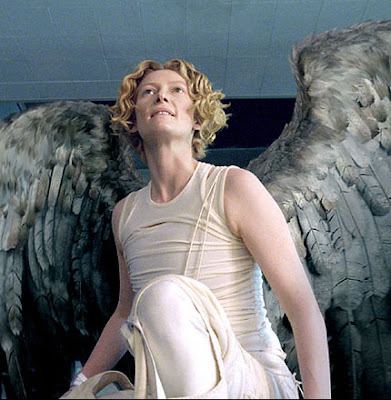 .
It’s a lovely look, but it’s not one I’m interested in emulating, partly because I can’t. If you’ve met me in person, you might have noticed a certain … largeness … about my hips, a certain … not-so-largeness … around my middle section. I look like a woman, and no amount of binding will turn me into a svelte, effete androgen. The best I can hope for is barrel-chested drag-king, and while I may try it one day, I still won’t ever look like Tilda, more’s the pity.
.
But that’s ok. Because when I play with gender, I don’t want to play it down. I want to play it up. In my estimation, masculinity and femininity should be decoupled, two separate sliding scales. If you turn up your masculinity, you should not automatically turn down your femininity, nor vice versa. You can turn them both down to zero, in which case you wind up a Swinton-esque, androgynous creature, in the best case, and Pat-from-Saturday-Night-Live, in the worst. You can turn up one or the other,  or you can turn up both, and be something for which there is perhaps no word.
.
The closest approximation of what I’m looking for might be hermaphroditic. The word comes from the God/dess Hermaphroditus, born male, the son of Hermes and Aphrodite. In a stunning gender-norm-reversal of the common Grecian story of desire and rape, the water-nymph Salmacis saw Hermaphroditus and was driven mad with desire for him. Although he had refused her, she hid behind a tree to watch him bathe, and on seeing him unclothed, seized him and embraced and kissed him, crying to the Gods that they should never be parted. Never ones to skip out on an opportunity to be overly literal and play a cruel trick on mortals, the Gods listened and joined their two forms, creating a being with both sets of genitalia, both a man and a woman. “Hermaphrodite” is now a somewhat un-P.C. term for “Intersex,” but is typically used to mean a person who is, as May said, 50%/50% Male-Female, rather than 100% of each.
.
Which is not to say that nobody in literature has ever had that brilliant idea before. I give you Neil Gaiman’s Anthropomorphic Personification of Desire:
.

.
This is not a particularly fabulous rendition; in fact, I find that none of the renditions, in the graphic novels or available on the internet, are really perfect. It’s very hard to draw a creature entirely male and entirely female; an entity that embodies everything you want. Everything everybody wants. But it does make sense that such a creature would be not part male, part female, but all there was to be of both of those, and more. Even in this picture, we see the suggestion of breasts at the same time as the suggestion of an adams apple, a strong jawline and soft lips, a whole lot of sex and a whole lot of gender.
.
I like that. Liking gender, finding masculinity and femininity both sexy, but more so when together, I feel like I just want to get as much gender as I possibly can. I want it all, all the time. I recently cut my hair short. Short so that my dad says “You look like a 10-year-old-boy” and my best friend says “You are so butch! Like a hot little elf!” (I’ll take her response over his, any day). I suppose at this point should not be surprised, but now that I’m masculine from the neck up, I find myself craving sundresses and floral skirts. I cannot be just one. I must have all, I must have both, the more I scale up my masculinity, the more I want to scale up my femininity to match. To keep a balance; all gender or none. Everything or nothing, baby.
.
There are, of course, questions to be asked here, and one that has been rattling around in my head has to do with how all this lovely gender is expressed. When I talk about being feminine, masculine, both, I talk first and foremost about clothing, from a tailcoat and a bowler hat to a motorcycle jacket to a flirty, fitted dress to a red satin pencil skirt and pumps, gender is something I put on to go out and peel back off when I come home again. The multiplicity I talk about comes when I add red lipstick to the bowler and tails, put the motorcycle jacket and the sundress together, wear a collared shirt and tie with my red skirt and heels. Some of it comes with my hair… when a few months ago it was long and feminine, I could put it up or take it down to suit my mood. Now, it’s a fixed point around which my gender expression can turn.
.
So my question, for another post, and harkening back to how I felt when I made love to May in the post he’s linked to in his caption, is how one expresses gender without the props? How can I be a man when I’m naked, how can I be masculine-and-feminine at the same time when I haven’t got my lipstick, my fedora, my toolkit of gender signifiers? How can the lovely boy in the Male Submission Art picture that started this look so feminine around the curve of his back and ass, so masculine in his shoulders, his face? What is gender-in-the-nude? I’m not sure. If you’ve got thoughts, let me know – I will keep thinking, and tell you when the pieces fit together.

This site uses Akismet to reduce spam. Learn how your comment data is processed.